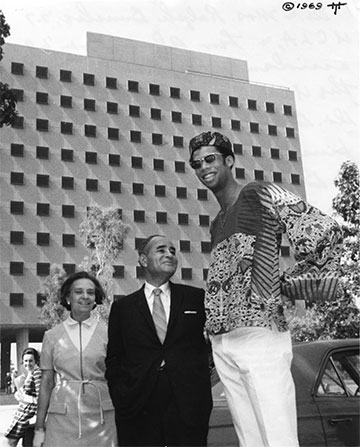 In celebration of Black History Month this February and in the spirit of visionaries and trailblazers, which is what the UCLA Luskin Conference Center hopes to inspire, here are just a few of the many amazing people who have visited, attended or taught at UCLA, both past and present. Their contributions and accomplishments have made the campus — and the world — a richer, better place.

One of the earliest of these trailblazers is political scientist, academic, activist and diplomat Ralph Bunche (class of 1927) who became the first African-American to be awarded the Nobel Peace Prize in 1950 for his role as acting UN mediator, successfully arbitrating the armistice agreements between Arab States and Israel in the late 1940s. Bunche rose from humble beginnings; having lost his parents at an early age and being raised by his grandmother, he worked while he went to school. As a brilliant student and debater, he went on to attend UCLA, competed in track and field and graduated summa cum laude and Phi Beta Kappa as valedictorian of his class. Among his many other accomplishments, he was also the first African-American to earn a Ph.D. in political science from Harvard University and was a key player in the formation of the United Nations, serving as Under-Secretary-General in 1955.

Not surprisingly, Bunche was a supporter of the Civil Rights Movement and participated in the March on Washington where Martin Luther King gave his “I Have a Dream” speech and also in the Selma to Montgomery, Alabama March in 1965. About a month after that successful, non-violent march, Dr. King spoke to UCLA students at the foot of Janss Steps on the UCLA campus. The location where King stood to deliver his speech is now marked with a plaque and is a highlight of many campus tours.

Then there’s alumnus and accomplished scientist, James E. Lu Valle (BA chemistry 1936, MA chemistry and physics 1937). Nicknamed the “Westwood Whirlwind,” he was the captain of the track and field team, paying his way through school with a Regents’ scholarship and a job in the chemistry lab. He graduated Phi Beta Kappa the same year he won a bronze medal in the 1936 Olympic Games in Berlin. After the Olympics, he returned as a masters student and founded what is now the UCLA Graduate Students Association. After receiving his Ph.D. in chemistry and mathematics from the California Institute of Technology (CalTech), Lu Valle joined the Eastman Kodak Company’s research laboratories, worked with Enrico Fermi’s nuclear research team at the University of Chicago and carved out a distinguished career in the photography industry, where he made notable contributions to research. He went to Stanford University in 1971 as a visiting scholar, where he became director of Stanford laboratories. 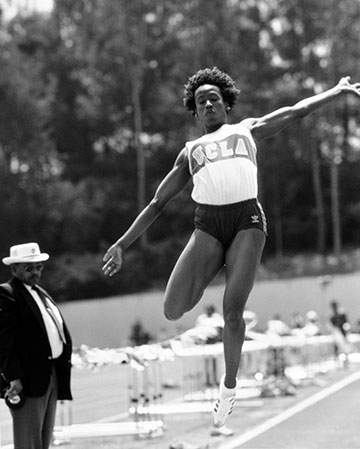 Jackie Joyner competed in the heptathlon for UCLA in 1982 and 1983. UCLA won NCAA track championships both years.

Another scientist — molecular biologist and RNA researcher, Dr. Tracy Johnson — is also an educator, mentor and champion for reinvigorating undergraduate science education. Known to pull students from their seats and have them act out a gene-splicing mechanism, Johnson hopes to prepare and retain more of them to do research in the challenging STEM fields: science, technology, engineering and math. Johnson believes in giving Bruin students an authentic research experience by nurturing a sense of discovery; their education is collaborative, interactive and evidence-based, with a focus on problem-solving. In 2013, she received the UC San Diego Chancellor’s Associates Award for Excellence in Undergraduate Teaching and, in that same year, was selected as one of the Top 20 Women Professors in California. She currently serves as head of the Howard Hughes Medical Institute’s “Pathways to Success” grant program at UCLA.

One of the most decorated female athletes at UCLA and in sports history is Olympic medalist and track star Jackie Joyner-Kersee (class of 1985). Growing up in East St. Louis, Illinois without a lot of material advantages but plenty of family love and support, she believed in herself, becoming a basketball and track star in high school and then winning a basketball scholarship to UCLA. There, she was a four-year starter as well as competed in both track and field. During her time at UCLA, she also competed in the 1984 Olympic Games, winning the silver medal in the heptathlon. She then went on to take home multiple medals in the 1988, 1992 and 1996 Olympics. Among the many accolades she has received, in 2004, she was inducted into the U.S. Track and Field Hall of Fame. Named “The Greatest Female Athlete of the 20th Century” by Sports Illustrated Magazine, Joyner-Kersee still ranks among the all-time greatest women athletes in the heptathlon and the long jump. Since retiring from competition, Kersee has focused on many philanthropic efforts, one of which was creating the Jackie Joyner-Kersee Foundation, which provides youth, adults, and families with athletic lessons and the resources to improve their quality of life with special attention directed to East St. Louis, Illinois, her hometown. She has also raised $12 million to build a safe haven for young people in East St. Louis. Of her efforts, she says, “When I leave this earth, I want to know I’ve created something that will help others.”

At UCLA, we celebrate these exemplary alumni, educators and visionaries, who embody the spirit of optimism and innovation that drives everything we do. You can learn about more trailblazers and their incredible contributions below: