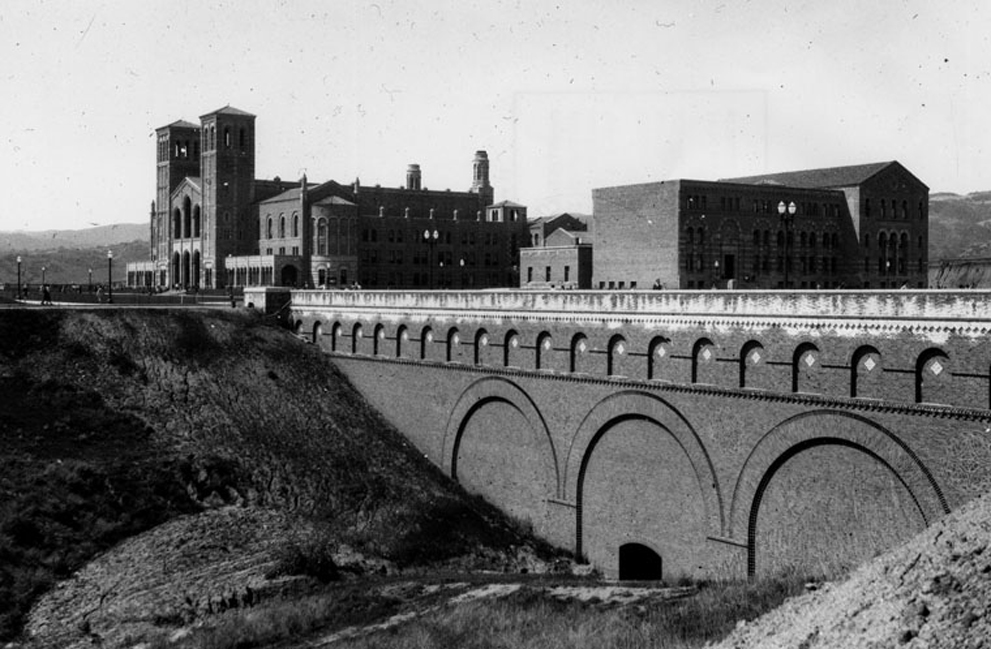 The Story of UCLA’s Hidden Bridge

Take a walk through Dickson Plaza near UCLA’s famous Royce Hall and Powell Library, and you might see a sign along the road that reads “Weight Limit” for a bridge. Unless you’re really pre-occupied, you’ll probably wonder why such a sign exists – where there clearly doesn’t appear to be a bridge!

In 1927, the UCLA campus had a deep arroyo running through the east and west portions of campus. One of the first priorities at the new campus was to construct a bridge to address the problem of getting across this deep arroyo.

UCLA supervising architect, George W. Kelham, designed a bridge modeled after Roman aqueducts, with three massive arches, using limestone and inlaid red brick. The bridge also had intricate parapets and smaller arches along its upper portion. At the time, it was truly a sight to be seen. The bridge wasn’t only necessary for hauling supplies into the new campus, but its purpose was also to be the main entryway for the university’s east side.

The new bridge was dedicated on October 22, 1927, in front of a large crowd including Associated Students President Thomas J. Cunningham and California Governor C.C. Young. It was actually the first structure to be completed at the new UCLA campus in Westwood.

Through the years that followed, the bridge served many purposes other than transportation. During the Great Depression, the bridge provided shelter for impoverished students at UCLA. During World War II, enough food was stored underneath it to feed 50,000 people in the event of an attack.

So what happened to the bridge? After World War II and the opportunity for returning soldiers to receive a college education under the G.I. Bill, administrators anticipated a major increase in enrollment at UCLA. To accommodate this spike in enrollment, the university needed more space for new buildings. This, in effect, meant the end of the arroyo and the bridge. It was filled with soil up to the brim of the bridge – and the land used for the buildings that make up North Campus, including those around Dickson Plaza.

The arches remain hidden – and people have always wondered what it would be like to excavate the bridge. So much so that in 1994, there was a proposal to excavate and build an amphitheater. This never happened, but the bridge is actually still classified as a functioning bridge, receives an annual inspection, and is held to a weight limit – as indicated by the sign.