One of the key things managers and supervisors grapple with is how to create teams that care about the goals of their organization and one another. After all, people who work well together tend to feed on collective achievements, spark confidence and parse problems better than those who don’t. 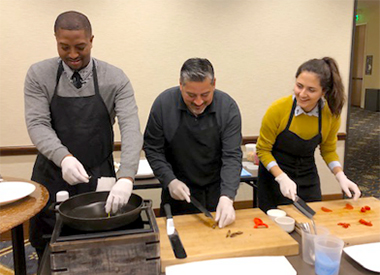 Paul Abramson knows how critical strong, healthy teamwork — and finding creative ways to foster this — is.

“The importance of a team-building event cannot be overstated,” said Abramson, the director of the UCLA Central Ticket Office. “The ultimate goal through these events is to enhance the overall working relationship within the team.”

Over the years, he and his staff have participated in a variety of such events, including more adventurous ones like a ropes course and a scavenger hunt.

Their most recent outing, organized by Elyse Swanson, a senior catering sales manager at the UCLA Meyer and Renee Luskin Conference Center, and facilitated by Executive Chef Jason Tingley and Chef de Cuisine Jeromy Sung, from the in-house Plateia restaurant and lounge, was something Abramson’s team really devoured. 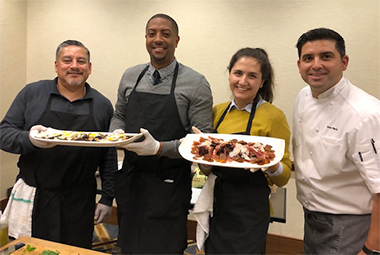 Their task? To work in groups to create a variety of dishes and drinks that the team could enjoy together.

“Having the staff work on separate parts of the meal allowed them to interact in ways that enhanced their connections,” said Abramson. “Each small team had a role in that part of the meal, and they had to work together to deliver it. The fact that we were creating a portion of our meal that evening added to the excitement of the project.”

These items were placed alongside a buffet of paella rice, escalivada, pescado asado, filete de res, and Spanish burnt cheesecake, flan and fresh fruit for dessert. 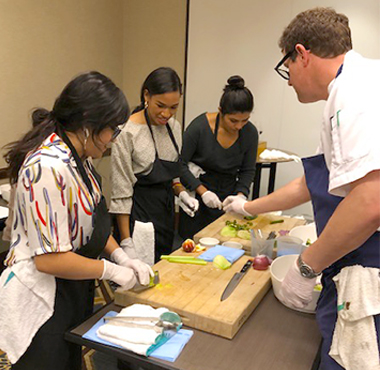 UCLA leads the country when it comes to campus dining, and the Luskin Conference Center and Plateia, which, like the dining program, are operated by UCLA Housing & Hospitality, are also known for providing high-level customer service and top-quality customer experience.

With those pieces in place, event planners and meeting organizers at the Luskin Conference Center began to explore how they might be mixed to create extraordinary, delicious and educational moments for teams as part of their small meetings packages.

Other recent food-infused team-building events enjoyed as part of meetings that the Luskin Conference Center include a sushi-making and sake pairing, as well as an upcoming fresh pasta-making activity. Both events were crafted based on the interests of the teams that would be attending.

“I don’t know of any other conference center that offers this kind of interactive experience,” said Swanson. “You’d normally have to go to a standard cooking class or something like that. This is something that we can do here right after a meeting as a way to provide some added value for small groups.” 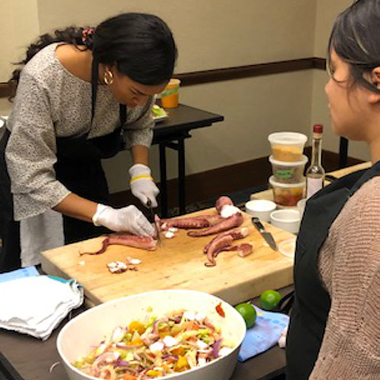 Swanson said food is something that naturally brings people together and fosters community. In addition, the inclusion of the chefs and the music and décor heighten the educational aspects of the activity by teaching participants about the history of various dishes and the people, communities and cultures that created them.

And, of course, the meal at the end is its own reward, she said.

Abramson said his team’s experience was fantastic and his expectations for this team-building activity were greatly surpassed.

“The Luskin team could not have made it any easier for us to participate in this,” he said. “They were flexible with the dates and made ours work in a creative way. They were attentive and engaged in what we were doing right along with us. I cannot highly recommend something like this enough.”

To learn more about adding a culinary team-building event to your next small meeting, contact Swanson at 310-794-1173 or eswanson@ha.ucla.edu.