Our vision? To foster incomparable visionaries.

The singular vision for the UCLA Meyer and Renee Luskin Conference Center is to serve as a place where great minds meet — a place where scholars, innovators, leaders and the diverse world community can build relationships, exchange ideas and make breakthroughs possible.

Here we highlight just a few of the great minds who molded UCLA into a leading institution in education, research, creativity and innovation. May these notable individuals provide a point of inspiration for those who gather and learn from each other at the UCLA Luskin Conference Center. 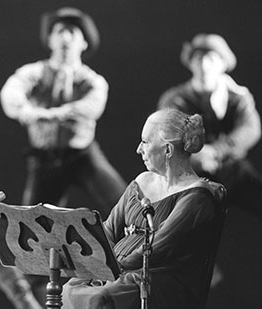 Agnes de Mille was an American choreographer whose innovations in the field of dance revolutionized musical theater. Graduating cum laude from UCLA with a degree in English at just 19, she embarked on a long search for success as a dancer and choreographer after being told she wasn’t “pretty enough” to act, which had been her original desire. Unable to find employment in the theater, she took it upon herself to compose her own dances and gave a series of solo dance recitals. Critically praised, but not financially rewarded, she persevered, moving to London to study for several years and develop her repertory.

One of the turning points in her career came in 1940 when the Ballet Theatre (now American Ballet Theatre) was formed and where Miss de Mille was a charter member, creating for the company her debut ballet, Black Ritual. The ballet had black dancers, the first time this had been done by a serious ballet company. Though Black Ritual was not a success, in the following year, she created Three Virgins and a Devil for the company, which was a tremendous hit and is still performed today to appreciative audiences and critical acclaim.

The next turning point came in 1942, when she created what is now her world-famous Rodeo (with its outstanding score by Aaron Copland) for the Ballet Russe de Monte Carlo — with stunning results. She herself danced the leading role at the Metropolitan Opera House on October 16, 1943, and received twenty-two curtain calls and standing ovations. This triumph, with its Americana setting, led Richard Rodgers and Oscar Hammerstein to select her to create the dances for their musical Oklahoma!. The tremendous success of these two works made American dance history.

After that followed Carousel (1945), Brigadoon (1947), Gentlemen Prefer Blondes (1949) and Paint Your Wagon (1951). She founded the Agnes de Mille Theater in 1953 and continued to produce many memorable ballets and dance books during the 1960s.

Reflecting her love for acting, her choreography not only conveyed the emotion of the characters, but enhanced the plot. Her dancers reflected the angst or turmoil of the characters instead of focusing on physical technique, which was how dance primarily was up until then.

In this photo, Ms. de Mille observes Joffrey Ballet cowboys in an episode from her first significant work, “Rodeo,” during “Conversations About the Dance” at the Greek Theater in 1978. 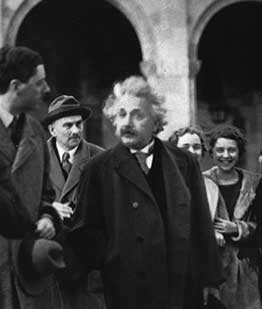 Nobel Prize recipient, Albert Einstein addressed an overflowing crowd in Royce Hall on February 15, 1932. A visiting professor at Cal Tech at the time, Einstein shared his latest thinking on the theory of relativity with those attending this special event.

Want to see more historic photographs of UCLA and the Los Angeles area?  Check out the UCLA Digital Library’s UCLA Historic Photos Collection and the Los Angeles Times Photographic Archive. The Digital Library Program stores and provides access to a wide variety of images, texts, music, audio, and video items such as:  motion picture stills from the early years; medieval and renaissance manuscripts; an international AIDS poster collection; a variety of unusual maps; an ethnomusicology collection; oral histories of prominent individuals; papers from notable artists, public leaders, and special interest groups; and so much more. Check out your interests at the UCLA Digital Library! 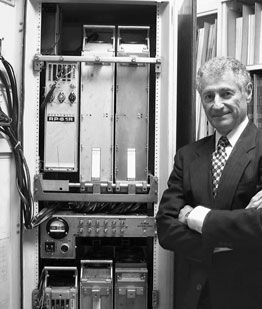 On October 29, 1969, distinguished UCLA Computer Science Professor Leonard Kleinrock and his team sent the very first message over the ARPANET—a network that laid the foundation for the modern Internet.

Pioneering the mathematical theory of “packet networks,” Kleinrock made several groundbreaking contributions to the field of computer networking technology. He is recognized as one of the fathers of the Internet, along with Vinton Cerf, Robert Kahn, and Larry Roberts, and was an inaugural inductee into the Internet Society’s Internet Hall of Fame in 2012.

Kleinrock is a member of the prestigious American Academy of Arts and Sciences and the National Academy of Engineering. He is the recipient of the 2001 National Academy of Engineering’s Draper Prize that recognizes innovative engineering achievements that have led to “important benefits and significant improvement to the well-being and freedom of humanity.” In 2007, he was awarded the National Medal of Science—America’s highest scientific honor bestowed by the President of the United States.

You can visit UCLA’s Kleinrock Center for Internet Studies in Boelter Hall which houses exhibit space displaying period artifacts, documents, photographs, and the packet switch that formed the first connection on the ARPANET. Click here for website with directions and additional information. 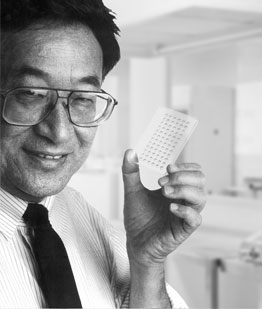 Paul Terasaki, a professor emeritus of surgery at UCLA, was the first to devise a method to perform “tissue typing” which assesses the compatibility of organ donors and recipients.

Terasaki earned his bachelor’s degree, master’s degree and Ph.D. from UCLA. and served as a professor of surgery at UCLA from 1969 until 1999. During his tenure, Terasaki developed the UCLA Kidney Transplant Registry in the 1970s—the first and largest in the world until the establishment of federal registries.

In 1984, he established a company, One Lambda, with eight former graduate students. The company has played a key role in the development and advancement of tissue typing. In 2000,  he founded the Terasaki Research Institute, a center dedicated to organ transplantation and immunology focusing on “innovative research to improve patient outcomes.”

UCLA Chancellor Gene Block has praised Terasaki as “an outstanding scientist and inspirational role model who has contributed to UCLA’s excellence and to society in so many ways. I have been inspired by his generosity and his humility. His vision and abiding belief in UCLA’s continued excellence are truly exceptional.”

Terasaki’s generosity to UCLA  has benefited many. His most notable gift is the largest ever made to the College of Letters & Science—underwriting the construction of the Terasaki Life Sciences Building. This state-of-the-art facility includes 33 laboratories where scientists from many disciplines come together to conduct  innovative research.

In 2012, Terasaki received the UCLA Medal— the university’s highest honor bestowed on those with  distinguished academic and professional achievements whose contributions to society illustrate the highest ideals of UCLA.